When a couple separates, there can be a lot of drama and hard feelings that result in the decision to divorce. This is especially true in legal cases of infidelity, where one spouse has had an affair. If you are the victim of your spouse’s infidelity, you may feel a range of intense emotions, including anger, betrayal, and heartbreak. You may also feel inspired to advance legal action against the person who caused your pain and seek compensation.

In North Carolina, there is a legal claim called “alienation of affection.” This claim allows the betrayed spouse to sue the person who had an affair with their spouse. Proving this under North Carolina alienation law can be difficult, especially when prenuptial or postnuptial agreements are in play. This is why it is crucial to have an experienced alienation of affection lawyer on your side. At Lehnhardt Price Family Law, our Weddington divorce lawyers have experience handling these cases. We understand the pain and anger you are feeling, and we will fight to get you the compensation you deserve. If you think you may have grounds for a legal claim for alienation of affection, please contact us today to begin consultation. 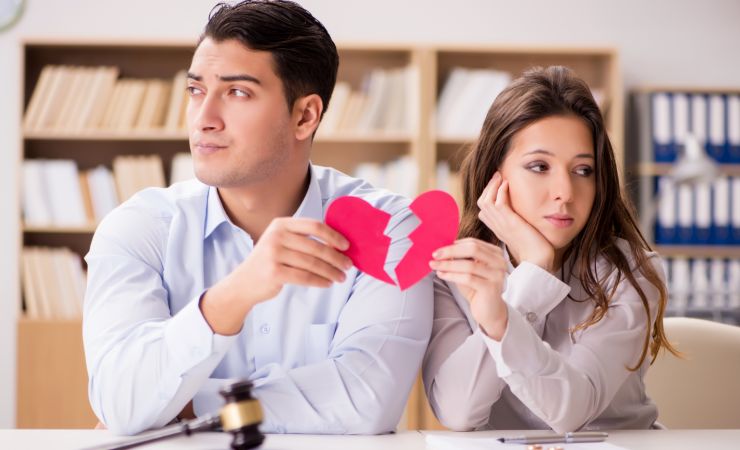 What Is Alienation of Affection?

Alienation of affection is a civil claim allowing an individual to sue any third party for a wrongful act that deprived them of a spouse’s affections. North Carolina is one of the few states that still recognizes the alienation of affection as a claim. This claim intends to punish the person who interfered in the marital relationship and to award damages to the injured spouse.

To win an alienation of affection claim, the plaintiff must prove three elements:

A successful alienation of affection claim can result in the person who committed the wrongful act being ordered to pay damages directly to the injured spouse as part of their separation. These damages often include economic losses, such as income loss or property value and services. The court may also award noneconomic damages, such as pain and suffering.

What Evidence Is Needed to Prove Alienation of Affection?

To prove alienation of affection, the plaintiff will need to show that their relationship with their spouse diminished after the affair began. Forms of alienating evidence that can be used to prove this includes text messages, emails, social media messages, and phone records. Within these messages, the court will look for evidence of love, affection, and intimacy between the plaintiff and their spouse. They will also look for any reference to the paramour that could suggest that the plaintiff’s spouse was more interested in them than they were in their spouse.

In addition to evidence of the affair, the plaintiff will also need to provide proof that the matter was a substantial cause of the divorce. This can be done through testimony from the plaintiff, their spouse, and witnesses to the marriage. The court will also consider any evidence that suggests that the paramour was trying to end the plaintiff’s marriage. Consulting with an attorney is key to ensuring that the evidence you are using to prove your alienation of affection claim is appropriate to support the accusation.

Is it Worth Suing for Alienation of Affection?

Anyone has the legal right to file a civil lawsuit if another party has wronged them. However, whether or not it is worth pursuing a claim will depend on the specific facts of your case. You should always consult about your experience with an attorney to assess the potential merits of your claim and what damages you may be able to recover. This will determine how much money you can receive through a successful claim and what forms of evidence are needed to prove your case.

How Hard Is it to Prove Alienation of Affection?

Alienation of affection claims can be challenging to prove. You will need to have evidence of the affair itself and that the affair was a substantial cause of your divorce. This can include text messages, emails, social media messages, phone records, and testimony from witnesses. Surveillance footage of the two individuals together is not typically enough to prove the alienation of affection claim, as it does not indicate the relationship between the two individuals or the intent. Supporting evidence is key to proving your case.

What Defenses Can I Anticipate?

What Damages Could I be Awarded?

If your claim is successful, compensatory damages may be awarded to you. The damages can entail economic losses, such as lost wages, and noneconomic losses, such as pain and suffering. You may also receive punitive damages in some cases. These damages are meant to serve as punishment to the defendant and act as a deterrent for similar behavior in others. The total amount of damages you may be awarded will depend on the exact facts of your case.

If you believe you have a legitimate claim for alienation of affection, it is important to consult with an experienced North Carolina alienation attorney as soon as possible. The attorneys at Lehnhardt Price Family Law are here to support the entire Weddington community through the divorce process and can help you determine whether or not you have a claim for alienation of affection. Contact us today for a consultation and to further assess your grounds for a claim.

Dana is not only an excellent attorney but an excellent person. She was a true blessing to me during some very difficult days! She is a master of her trade! She cares about her clients…

Jessica Price represented me during a difficult divorce proceeding ultimately achieving favorable results. Jessica was an excellent resource and was very knowledgeable with a thorough understanding of North Carolina divorce and custody laws and court…

There are few things in life as difficult as a divorce. I was overwhelmed with emotional and legal confusion. I needed an advocate who was knowledgeable, compassionate and both personal and professional. I found this…

I would highly recommend Ms. Price if you need a family law attorney.

Dana was very conscientious of my legal fees and discussed thoroughly with me the risks and costs of each legal strategy. My confidence was well placed in Dana and her friendly staff.